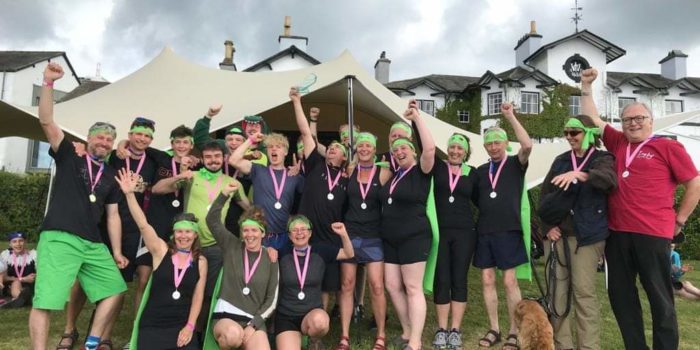 Over the summer, Amy’s Care team and their friends and supporters have been busy fundraising and getting fit into the bargain.

Our Dragon Boat team DID IT AGAIN!

For the second year we are race champions at the CBA Dragon Bay Race day and have another fab trophy to add to the collection (really must get that trophy cabinet built – we’re running out of room on the shelf) and raised money for Amy’s Care into the bargain.

Later in July, members of the staff team took part in the Honisterfest Fell Race (alright, we didn’t actually run, but we walked the route in a pretty fast time). Climbing up a 300-yard near vertical wooden ladder inside the mine was definitely a highlight -or a low light given that it was underground – that and the jellybabies they gave us for energy! Well done to the folks at Honister Slate Mine for putting on the event and selecting Amy’s Care as one of their good causes.

Trishaw Volunteers Brave the Cold. Whilst we wait for the advent of Spring when it…

Amy's Care has a new home. We have now settled into our new office space…